Bangor is pretty much the centre of the universe lying between the important cities of the world, Dublin, Birmingham, Liverpool and Manchester and is also quite handy for the Isle of Man. It styles itself “City of Learning” – others call it “City of Students”. Don’t worry, it is not only easy to get to, it’s easy to get out of as well.

International flights arrive at previously mentioned important cities plus Cardiff, Bristol and East Midlands, which are linked to the London-Holyhead main line via Crewe and Chester.

The main road from the east or west is the A55 “Expressway” which runs along the North Coast of Wales and carves a line equidistant between Bangor and Bethesda. Here it crosses the more picturesque A5,  Thomas Telford’s Historic Route, which he built to connect London and Dublin via Holyhead with Bethesda High Street. 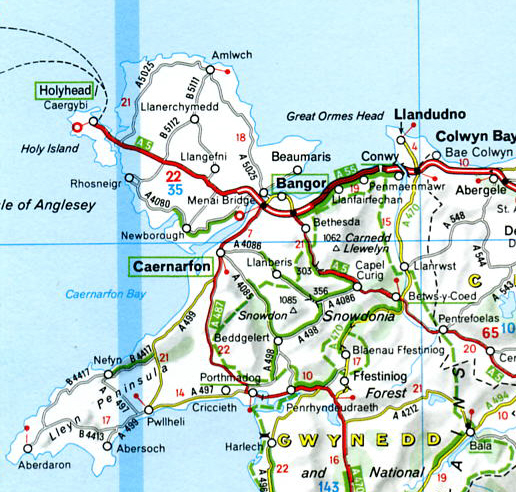 At the A55/A5 junction is a service station commonly know as One Stop. It’s Welsh name is Llys-y-Gwynt but about three bankruptcies previous it was called One Stop and the name has stuck. Here you will find the Bangor Travelodge which is the nearest thing to the Ritz we have around here and you can usually get a cheap room. Whatever, this is the junction you want if you are driving on the A55.

Two miles down the A5 you arrive in Bethesda. The first shop on the right is Londis and here you turn right onto Station Road. You can’t help but see the enormous new health centre about a hundred yards down on the right, and immediately beyond this is the Rugby Club.

If you are arriving on the A5 from the direction of Shrewsbury you will be surprised to hear the last shop on the left is Londis where you should turn left onto Station Road.

By train, Bangor is your station.

The good news is, if anything, Bethesda has too many buses. The bad news, if you are loaded down and it’s raining, is the bus stand is 15 minutes walk from the station. Any bus stopping at the bus stop on the left at the top of Deiniol Road which is directly opposite the station entrance will take you to the bus station (popularly know as the Clock) on Garth Road. Bethesda buses go from the very bottom stand. If you decide to walk, either walk straight down Deiniol Road to Garth Road on the right, or, for a marginally more interesting walk, bear right onto the High Street (the longest High Street in Wales – and it often seems like it) and cut down through the cathedral yard.

Bethesda buses: 7, 7C, 7L, 76, 77, 66, 67. (See the Buses link under Transport for the latest timetable) If you have time on your hands and the sun is shining there is also the No 6 which will provide you with good views as it struggles in a circuit through some of the higher villages and confusingly enters Bethesda from the other end (i.e , the end furthest from Bangor). Some of the other buses arrive in the middle of the High Street so, if you see the rival Spar, hop off and walk back to Londis. The bus drivers will put you right.